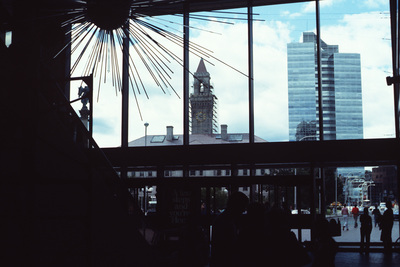 Worcester Common pictured from the entrance to Worcester Center, a shopping mall opened in 1971. The mall was demolished during 2000s era redevelopment after two failed attempts at revitalization. City hall (center), and it’s accompanying commons, was completed in 1898. It is an Italianate structure designed by Robert Peabody and John Stearns. It was added to the National Register of Historic Places in 1978. Peabody and Stearns are known for their incorporation of the tower as a key architectural form. The Worcester City Hall tower resembles that of the original Providence train station (now destroyed), also designed by Peabody and Stearns.