Demolition of Orms Street Synagogue (1 of 3) 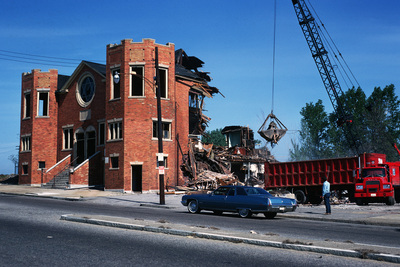 This site was the original meeting place of the preexisting Chevrah (congregation), and Congregation The Sons of Zion was a third Orthodox Congregation, chartered in 1875 by a group of Jewish immigrants. There was also a synagogue opened on Canal street nearby in 1882, and upon being "outgrown" Rabbi Rabinovitz in 1888 procured the money and labored four years to create the The Orms Street Synagogue, consecrated in 1893. However, in the 70s, with the construction of the Marriott Hotel, the synagogue was demolished. It is hard to research the why, or what I mean is the how, but redevelopments in this area were made to construct I-95. A suit was issued in 1971 by the congregation against the Providence Redevelopment Agency. A sad loss.