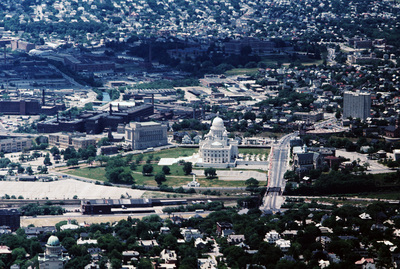 Aerial image of downtown Providence featuring the Rhode Island State House at the center. The Rhode Island State House was built in 1904, designed by McKim, Mead & White. The building's self-supporting marble dome is the fourth-largest of its kind in the world, following after only the Taj Mahal, St. Peter's Basilica, and the Minnesota State Capital. The inside of the dome features an elaborate mural depicting much of Rhode Island's origins. The State House's design follows a Classical and Renaissance style, and features several expansive skylights, Renaissance-inspired ceilings, and ornate interior decorations.