Federal Building (U. S. Customshouse) and East Side 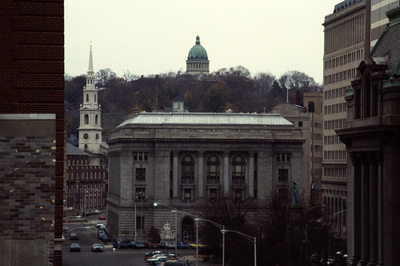 A view into the residential area of East Providence, overlooking the Federal Building and Kennedy Plaza. The First Baptist Church is on the left, and the green dome of the First Church of Christ, Scientist is rising through the skyline. The Federal Building was built in 1908 by Clark & Howe, and the design reflects a combination of Baroque and twentieth-century influences as well as French architectural design. The two marble sculptures at the building's entrance were designed by John Massey Rhind.