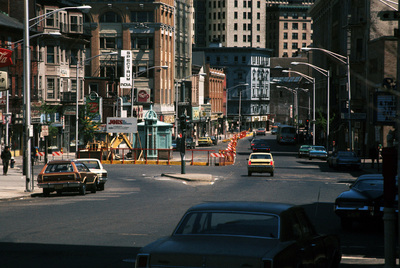 Street construction taking place on Weybosset Street in the late 1970s. Weybosset is a part of the cultural core that is downtown Providence, connecting to Westminster St. and Empire St. on opposing corners. The Fletcher Building and the Benjamin Dyer Block can be seen. Both served as incantations of the 20th century storefront, and renovated at the turn of the century. Fletcher was attributed three new stories and Dyer some of its french detailing. Revitalization motions would change the outlook of Weybosset and its place in the downtown area. This construction on the road would lay the groundwork of its current traffic flow, becoming two lanes on this side of Exchange Street.