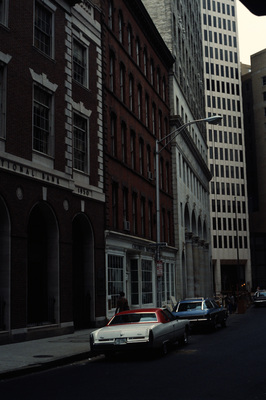 The Blackstone Block resided between the Providence National Bank and the Turk's Head Building. It was a work of the architect James C. Bucklin, whose other works include the Providence Arcade and the Monohassett Mill. A four-story office building constructed in 1861, the building signified a Renaissance Revival style, with its rusticated window caps and simple cornice molding. The building was demolished in 1979 and prior to its demolition, it had become the home of a Columbus National Bank, whose residence in the Blackstone Block barely extended to a decade.