Corner of Weybosset and Westminster Street 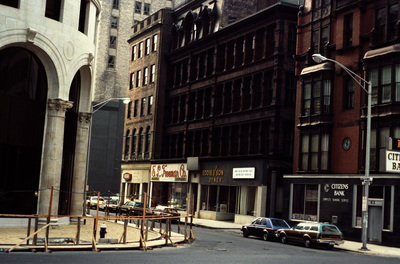 Pictured on the left is the Turk's Head Building with some minor street construction in front of it. The Turk's Head Building was constructed in 1913 by the Brown Land Co. In the early nineteenth century, a shop called "At the sign of the Turk's Head" existed in the Building's location. The shopkeeper, Jacob Whitman, installed a figurehead from an Ottoman Empire ship above the shop's doors. The figurehead was an Ottoman warrior, and though the original was washed away in a storm, a stone replica of the figurehead replaced it. The Turk's Head Building's name and facade date back at least a century from before it was established. The Exchange Bank Building, pictured on the right, is a commercial building in the Queen Anne style. The brick building featured granite trim typical of commercial buildings, and was rehabilitated as part of the Fleet Center complex in the 1980s.

Smolski, Chester; Howells and Stokes; and Stone, Carpenter and Wilson, "Corner of Weybosset and Westminster Street" (1979). Browse All. 1005.
https://digitalcommons.ric.edu/smolski_images/1005