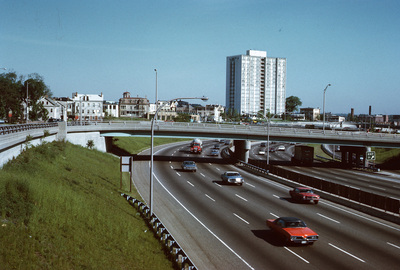 A view of the (then called) Bradford House from Interstate 95 in Providence. Completed in 1966, the building is one of several high-rise towers that was built around the city for elderly residents. As of 2015, the building is known as the Sister Dominica Manor and has also been called Federal Hill Manor because of its location in the Federal Hill District. It stands at 175 ft tall and as of 2015, it is the 15th- tallest building in Providence.