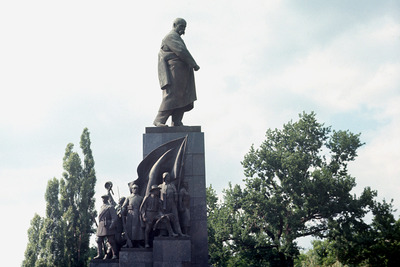 A monument in Kharkov to Ukraine’s greatest poet and artist who wrote and fought as a revolutionary democrat against serfdom and Tsarist rule. The monument is in Dzerzhinsky Square in Kharkov. A competition for the best Schevchenko monument took place in 1929. The third variation of the project in 1933 is the basis of this public sculpture. The architect Langbard contributed the solution to the pedistal. The Leningrad (St. Petersburg) foundries cast the figures attending the base of Kobzar, as Taras Shevchenko was affectionately known. The 5.5 meter high sculpture of the poet is in Schevchenko Park and compliments the Kharkov State University complex as well as the Derzhprom building.