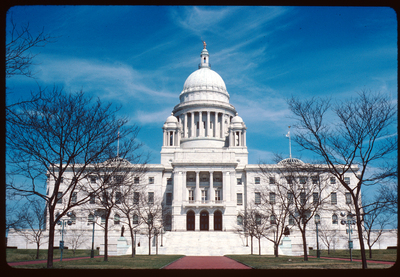 Work on the Rhode Island State House began in 1892, the design being awarded to McKim, Mead & White, the winners of a competition judged by The Board of State House Commissioners under the advice of A. D. F. Hamlin, Richard Morris Hunt, and Alpheus C. Morse. Prior to it's completion, Rhode Island used a rotation system in which the governor and legislature would move between different state houses, at one time including as many as five. By the later half of the 19th century, only the Old Providence State House and the Newport Colony House were used. This view, taken from the Francis and Gaspee Street perspective, clearly presents McKim, & Mead & Whites "American Renaissance" design, which incorporated Renaissance and Classical design elements in rejection of Victorian era designs, which McKim felt were gaudy and whose ornamentation he felt was idiosyncratic.