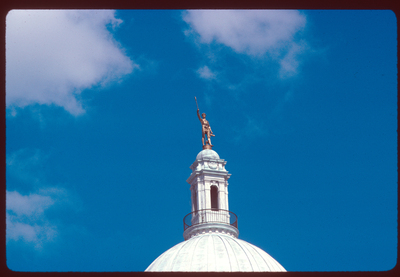 The “Independent Man” was first proposed to be a statue of Roger Williams at the annual meeting of the Rhode Island Historical Society in 1895. The statue, to be placed atop the proposed new State House, was designed by George T. Brewster for $3,000, who called the statue “Hope” and changed the design to fit the Renaissance Revival architecture of the building. Though now embraced as a unique symbol of the state, the statue was the subject of heated debate over the aesthetic and subject. However, a statement issued by the Capitol Commissioners declaring that the statue symbolized, "authority, dignity, independence, and power," put the debate to rest and it has been known as "The Independent Man" since. Since 1900, it has only moved once, in 1975, for repair and a new coat of gold leaf. This photograph was taken in 1980.