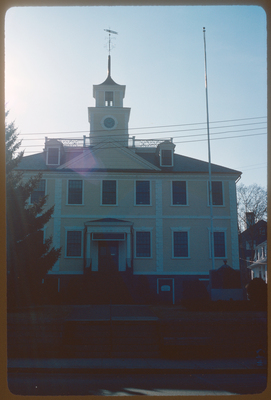 East Greenwich Town Hall, originally Kent County Courthouse, is shown in this 1980 photograph. It was constructed in 1804 by Oliver Wickes who drew inspiration from the existing Newport and Providence Colony Houses. Wickes' design, however, favors the federalist forms of the early 19th century over the colonial style of the older structures. Originally the five state houses were used in rotation by the governor and legislature of Rhode Island, but by the 1850s this location was no longer used. For a time it served as Kent County Courthouse, but as it was used infrequently it was turned over to the town of East Greenwich as Town Hall. This photograph shows the building before an edition was constructed in the mid 1990s, although the addition would not have be visible from this angle.