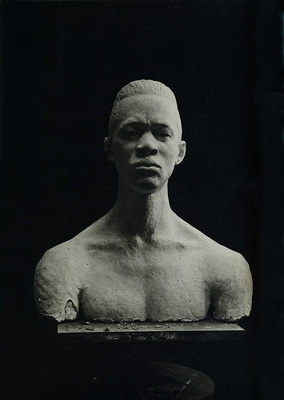 Undated. Printed in France. Inscribed on reverse by artist: "N.E. Prophet" Likely a portrait of Prophet's husband, Francis Ford, who joined her in Paris between c.1923-1926. Within weeks of her arrival in Paris (c.1921-1922) she began work on a clay bust that she later carved in wood while studying under noted sculptor Victor Joseph Ambroise Ségoffin. An undated diary excerpt may serve to reference this. Prophet writes of regaining her strength after two months of bed rest following her arrival in Paris: "As soon as I could stand up I went to work...I remember...how my arms felt as I swung them up to put on a great piece of clay." A period of three months was to have elapsed, after which Prophet writes, "I cut the bust in wood and the following year it was accepted in the Salon d'Automne, 1924." (The Rhode Islander, 8-10) The Rhode Island School of Design holds in its collection a wooden bust by Prophet titled, "Negro Head". It's creation is estimated to be 'before 1927'. It is similar in features and countenance to this piece. [See EP.01.14.01] (RISD) It can be reasonably speculated that this may be the first work that she completed in Paris. However, it must be noted that other sources cite that the bust is made in plaster and created c.1925-1929, though with unknown reference. (Leininger-Miller, 43) Duplicate image in collection is torn. On reverse of torn duplicate: "For Dad" "Elizabeth Ford". [As evident in her signature as it appears on photographs, artwork and letters: Shortly after Prophet arrived in Paris she began using the last name Prophet (a variation of her maiden name, Proffitt) and dropped the use of her married surname, Ford.]

This work is licensed under a Creative Commons Attribution 4.0 License.