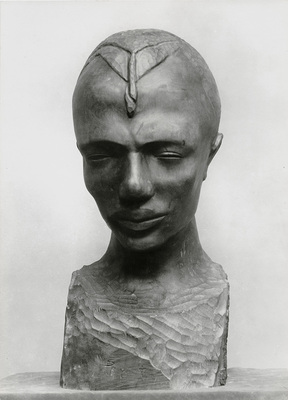 Undated. Printed in France. Inscribed on reverse by artist: "Congolaise", "in wood", "Nancy Elizabeth Prophet". 8 duplicates in collection. Some are inscribed as follows: {"Congolaise", "Nancy Elizabeth Prophet"} {"Congolais", "in wood", "life size, "Nancy Elizabeth Prophet"} {" "Congolaise" ", "in wood", "N. Elizabeth Prophet"} {"Congolais", "in wood", "Whitney Museum", "N.Elizabeth Prophet".} A profile view is also on file in the collection. It is folded/torn lengthwise and instructions written to a "Miss Grey" request 12 copies of the "front view" ( and explicitly "NOT profile") be sent to 24 Gould st, Newport, Rhode Island, Stats Unis." with the closing, "Thanks a million times. I'm so busy". Carved cherry wood. After attending the 'Exposition Coloniale' (Paris) in the summer of 1931, Prophet wrote to W.E.B. Du Bois, enthusiastically describing the sculpture she had seen there, writing that she had seen "heads that are of such a mental development that are rarely seen among Europeans. Heads of thought and reflection, types of great beauty and dignity of carriage ... People are seeing the aristocracy of Africa." (Leininger-Miller, 96) Congolais(e) was purchased by Gertrude Vanderbilt Payne Whitney after she viewed it at the 21st Art Association of Newport Annual Exhibition in 1932. It is currently held by the Whitney Museum. This piece is often described as depicting an 'African warrior'. The tile supposes a reference the French colonial possession of Congo-Brazzaville. (Also known as French Congo, this would have been an incorporated territory in the federation of French Equatorial Africa in 1931 and surely represented in the 'Exposition Coloniale'. [est. 1908]. (Olson, 224-225) The title reference and cultural imagery represented in this piece harbor discord. This bust visually reflects East African culture, as opposed to the culture of the Congolese; more specifically it references the plaited forelock of a Maasai warrior. Her reasons for the title, 'Congolais', are unknown; Prophet may or may not have intended significance in the disconnect.

This work is licensed under a Creative Commons Attribution 4.0 License.