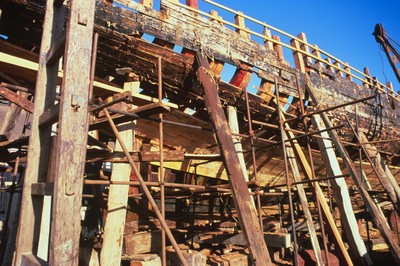 This photograph shows the rebuilding of the hull on the Ernestina during restoration in 1980. The Ernestina, originally the Effie M. Morrisey, is a 19th century schooner that spend the late 1940s through the 1960s sailing between the Cape Verde Island and making trans-Atlantic voyages until it finally fell into a state of disrepair in the 1960s. After restoration the schooner was gifted to the United States by Cape Verde.