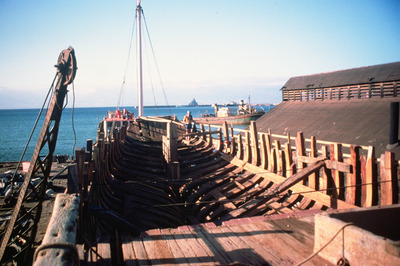 From the late 1940s to the 1960s the Ernestina sailed between the islands of Cape Verde and also made several Trans-Atlantic crossings before falling into disrepair. Originally titled the Effie M. Morrissey, The Ernestina is pictured during restoration in 1980. Restoration was carried out between 1977 and 1982 by Cape Verdeans who, upon completion in 1982, gifted the restored 19th century schooner to the United States.