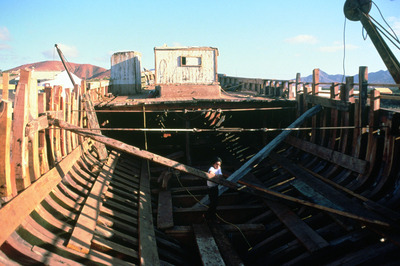 The Ernestina is a schooner that was built in New England in the 19th century. This photograph shows the schooner during restoration in Cape Verde. Restoration was done on São Vicente in Mindelo between 1977 and 1982, when it was gifted to the United States by Cape Verde. The Ernestina has brought many Cape Verdeans to New Bedford and back during it's Trans-Atlantic crossings. Currently it is in New Bedford as a National Historic Landmark.