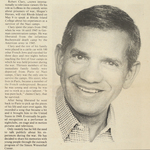 Robert Clary, known internationally to television viewers for his role as LeBeau in the comedy series about prisoners of war, Hogan's Heroes, visited Rhode Island College on May 9, 1985 to speak about his experiences as a survivor of the Nazi Camps. Clary's visit was sponsored by the RIC History Club, the college lectures committee, and RIC Office of International Studies, the Dean of Arts and Sciences and the President's Office.