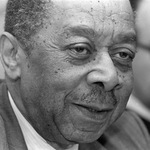 Kenneth Clark: Thirty Years After: Anticipated and Unanticipated Consequences (May 2, 1984)

Kenneth Clark, the social psychologist whose research was used to support the NAACP Legal Defense Fund's position in the famous Brown vs. Board of Education of Topeka, Kansas case in 1954, was the keynote speaker when Rhode Island College commemorated the historic U.S. Supreme Court action May 2 and 3, 1984. The 30th anniversary of the case was commemorated with observed during a two day conference which included key figures from the desegregation and civil rights movement.

30 Years After: Brown v. Board of Education of Topeka

This work is licensed under a Creative Commons Attribution-NonCommercial-No Derivative Works 4.0 International License.